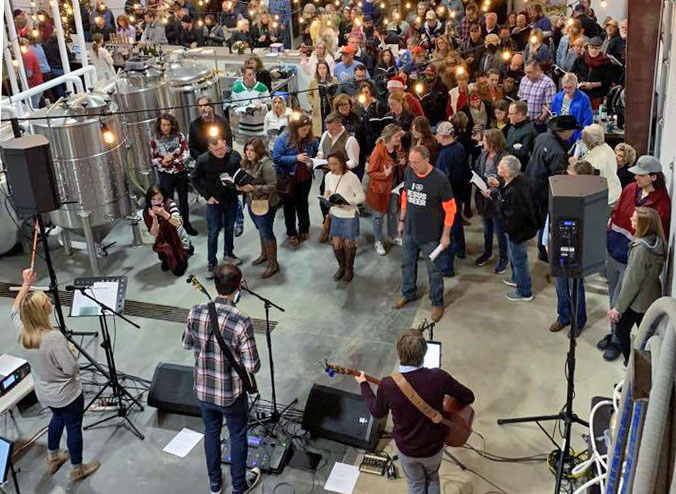 What a night of celebration of the reason for the season! A few hundred people—a record  crowd—turned out for the December Hymns & Hops event at 5 Stones Artisan Brewery. It was a fabulous night full of joy, praise and a good glass. Every other month, Matt Adler leads a worship band and guests in rousing renditions of traditional hymns. It required a bit of grace and mercy in line to fill a glass with fantastic handcrafted brews, such as the seasonal Merry Christmas or Mr. Nibbler, a brown ale with an essence of mixed nuts. Owner Scott Weatherly has built success upon success, opening the location on FM 1863 in 2016 after outgrowing his original property in Cibolo. Recently, 5 Stones was ranked 20th among the Top 50 breweries in Texas. About Hymns & Hops, Weatherly said the idea is to bring people together and sing, and since the program began in October, it’s gained ground like his brewing.  Jonathan Parker founded Hymns & Hops in North Carolina in 2016 with the mission to create the “space for families and people to celebrate the Gospel through community, song, and drink. In short the motto is:  Sing loud and die happy! The next roof raising event is February 23. Singing starts at 6 p.m.